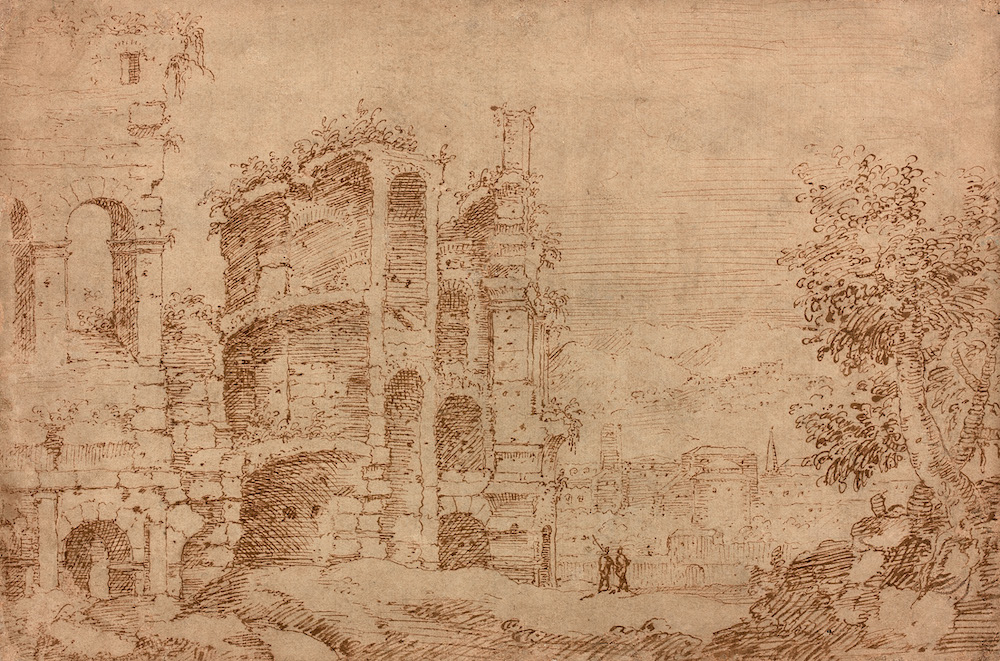 Recently rediscovered, our drawing is preparatory for the 13th plate of the recueuil Discorsi sopra L’Antichita di Roma by Vicenzo Scamozzi and is the only known drawing by Pittoni for this book. Vicenzo Scamozzi describes in each chapter an ancient monument of Rome. Chapter 13 is about the architecture of the Colosseum, and our drawing shows two views of the Roman arena: one is an exterior view of the still buried monument, the other is a cross section. In the background, two figures walk towards a city that could represent Rome. If Pittoni emphasizes the ephemeral character of ancient monuments with the ruins overgrown by vegetation, he also pays attention to their correct transcription. The archaeological precision responded to the interest of Renaissance intellectuals in ancient monuments and the need of artists to find visual sources to create their own classical landscapes. An example of this practice being Veronese’s use of Pittoni’s plates for the frescoes in Villa Barbaro in Maser and Domenico Brusasorci in Palazzo Vescovile in Verona. 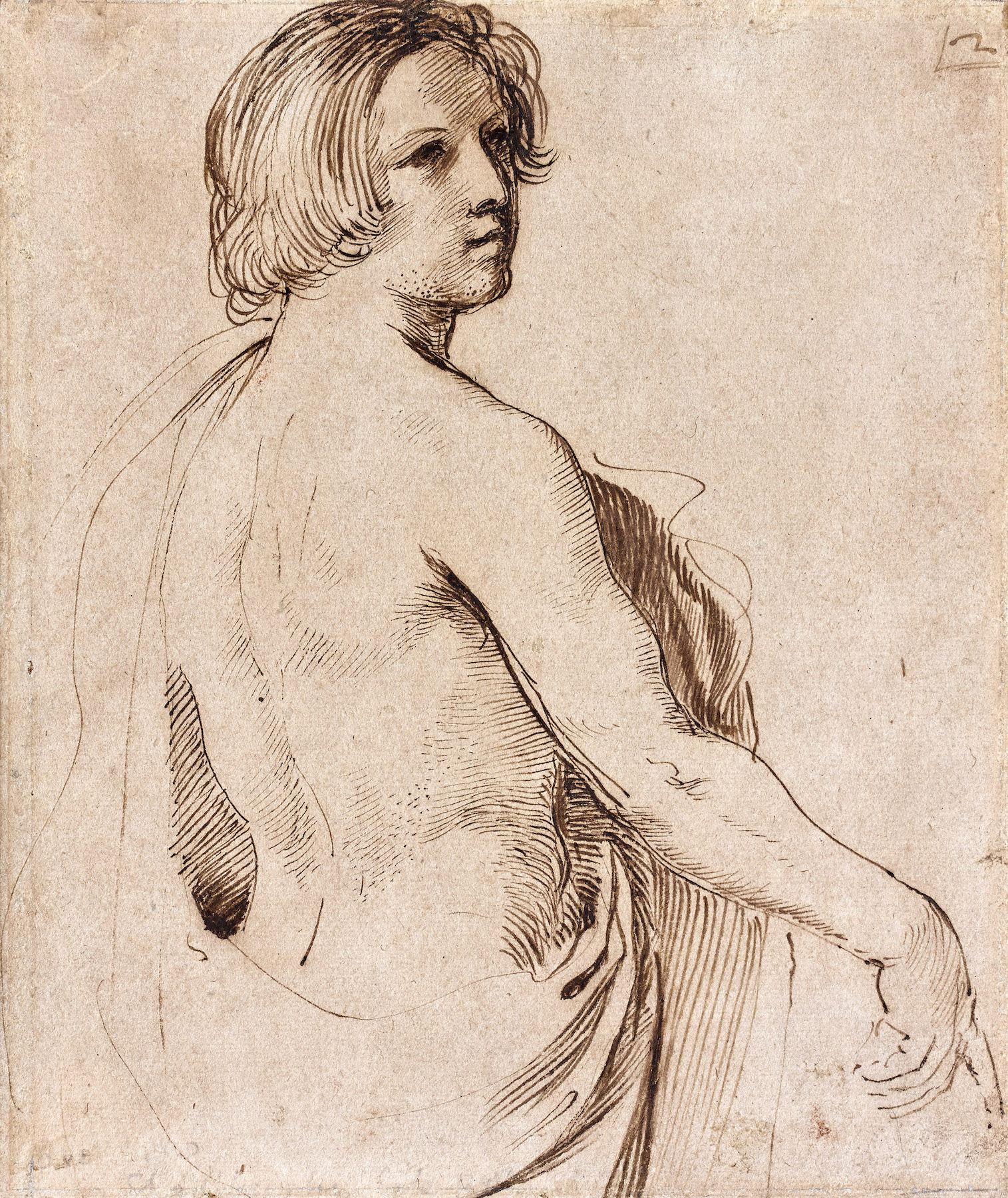 Our drawing is most probably a first study for the young man seen from the back in the picture Damon and Pythias today in the Confederazione Nazionale dei Coltivatori Diretti, Palazzo Rospigliosi, Rome. The execution of our drawing can be situated at the beginning of the 1630s. Guercino's studies in pen and ink executed at that time present identical stylistic characteristics as the texture "in fish filet". 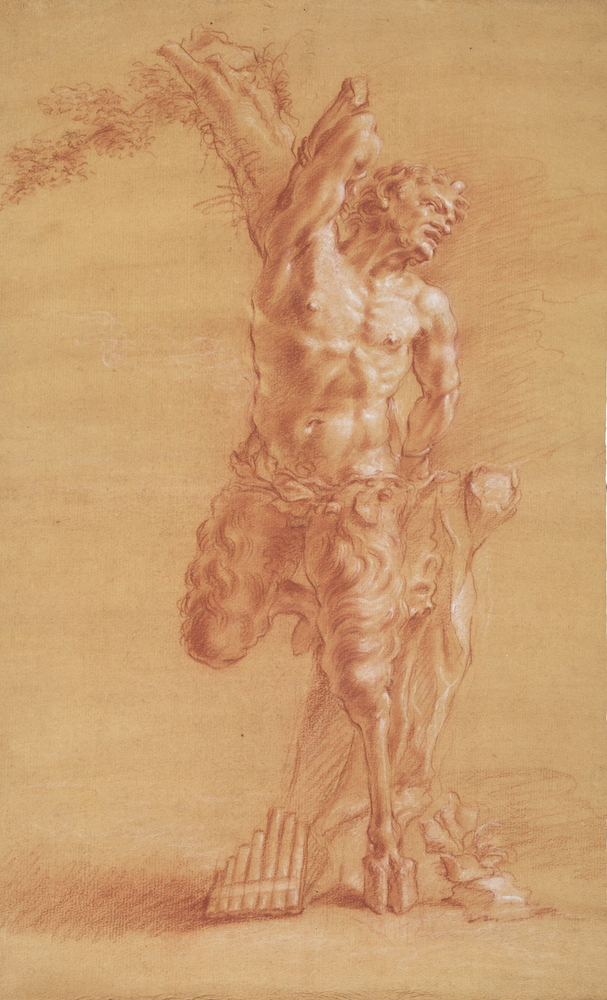 Francesco Monti was a prolific draftsman. The artist distinguished himself by his use of colored paper, often prepared, and white chalk, drawn with a very fine and vibrant line, giving crystalline effects to the light. If Monti drew mainly in black chalk and sometimes charcoal, he also used red chalk. Three other drawings executed in red and white chalk on yellow prepared paper by the artist are known: The Immaculate Conception and Jesus Chasing the Merchants from the Temple, both at the Academy of Carrara, as well as Cain and Abel in a private collection. Strong expression, sometimes almost violent in feeling, characterize Monti's drawings.

Our drawing is a study made after the sculpture Marsyas by Pierre Le Gros (1666-1719), or one of the many versions or casts of the sculpture. The sculpture appears to have been executed around 1715. Le Gros’ Marsyas was highly appreciated in the eighteenth century. Copies have been found in England, France, and northern Italy. 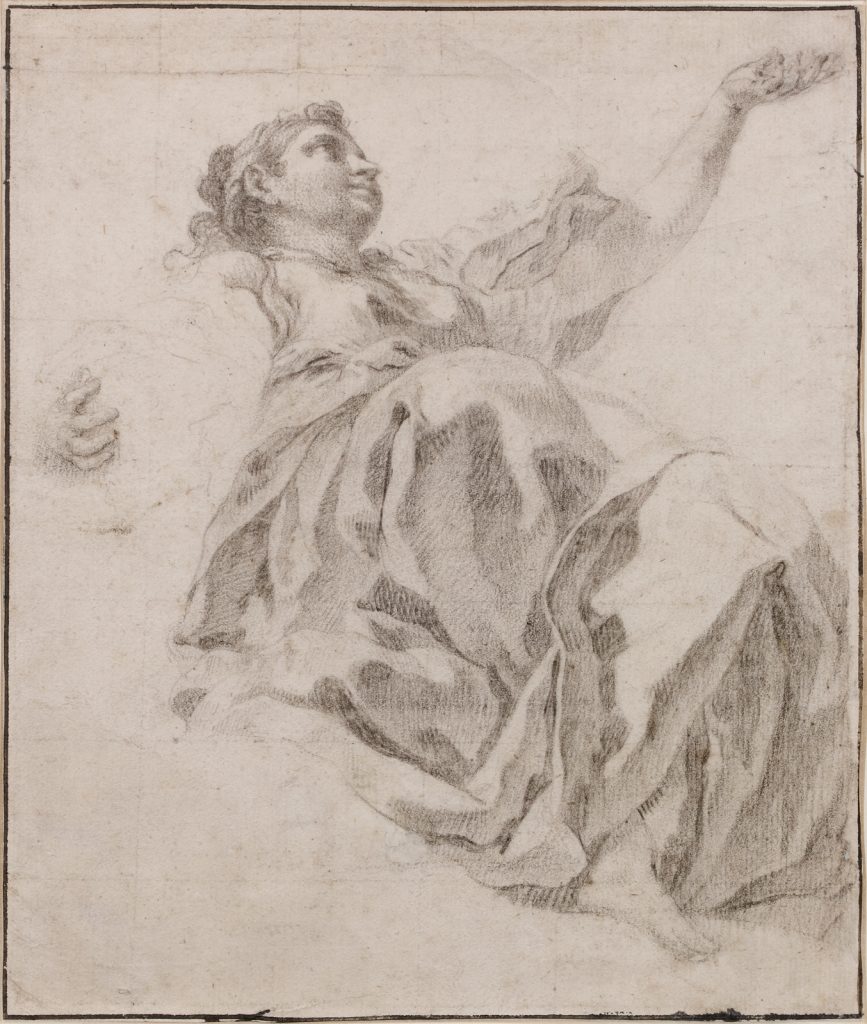 Student of Giovanni Battista Piazzetta, Francesco Polazzo painted altarpieces for Venetian churches and executed decorative works for important patrician families. Our drawing shows stylistic affinities with the graphic work of the artist and evokes the female figures painted by Polazzo in the Palazzo Zen between 1735 and 1737. 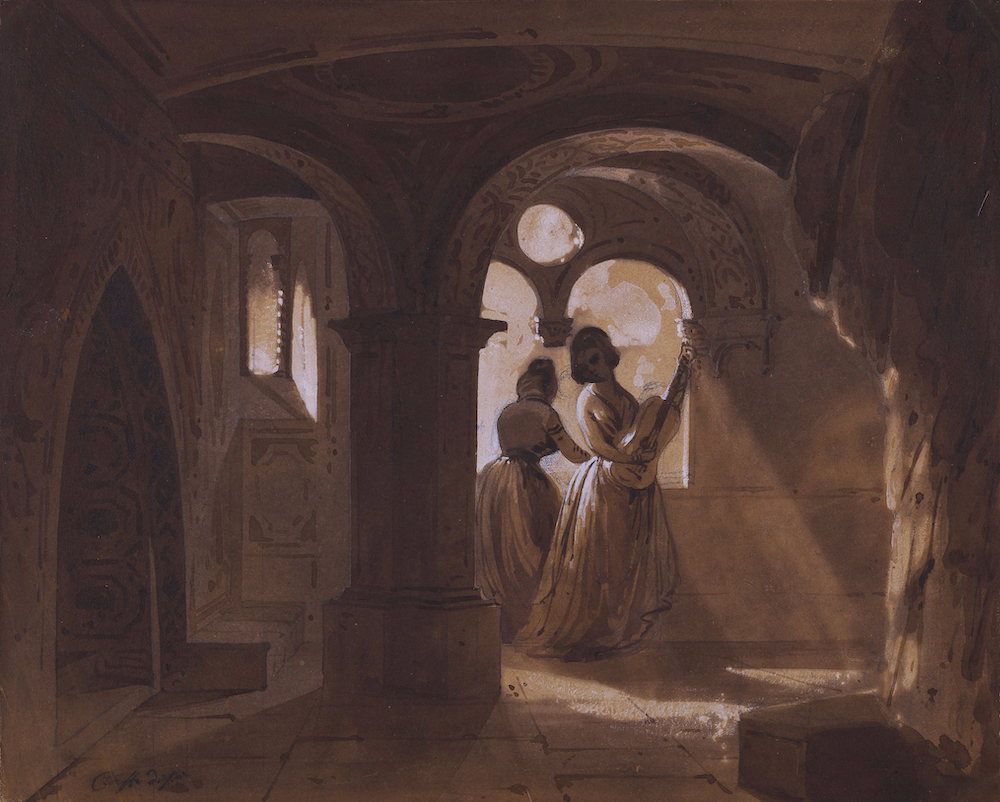 Ippolito Caffi was an Italian painter known for his landscapes of Italy, and in particular of Venice, Rome, and Naples, which he intended for sale to travellers on the Grand Tour. The present drawing is a rare example of an interior scene by the artist. Here, Caffi devoted himself entirely to a scene in the troubadour genre. Two other drawings by Caffi, a Couple in Love and Interior of a Church with Figures, recently on the art market, take place in the same setting. In these three drawings, the artist explores the pictorial possibilities of dramatic lighting created by open windows and doors illuminating dark interiors.